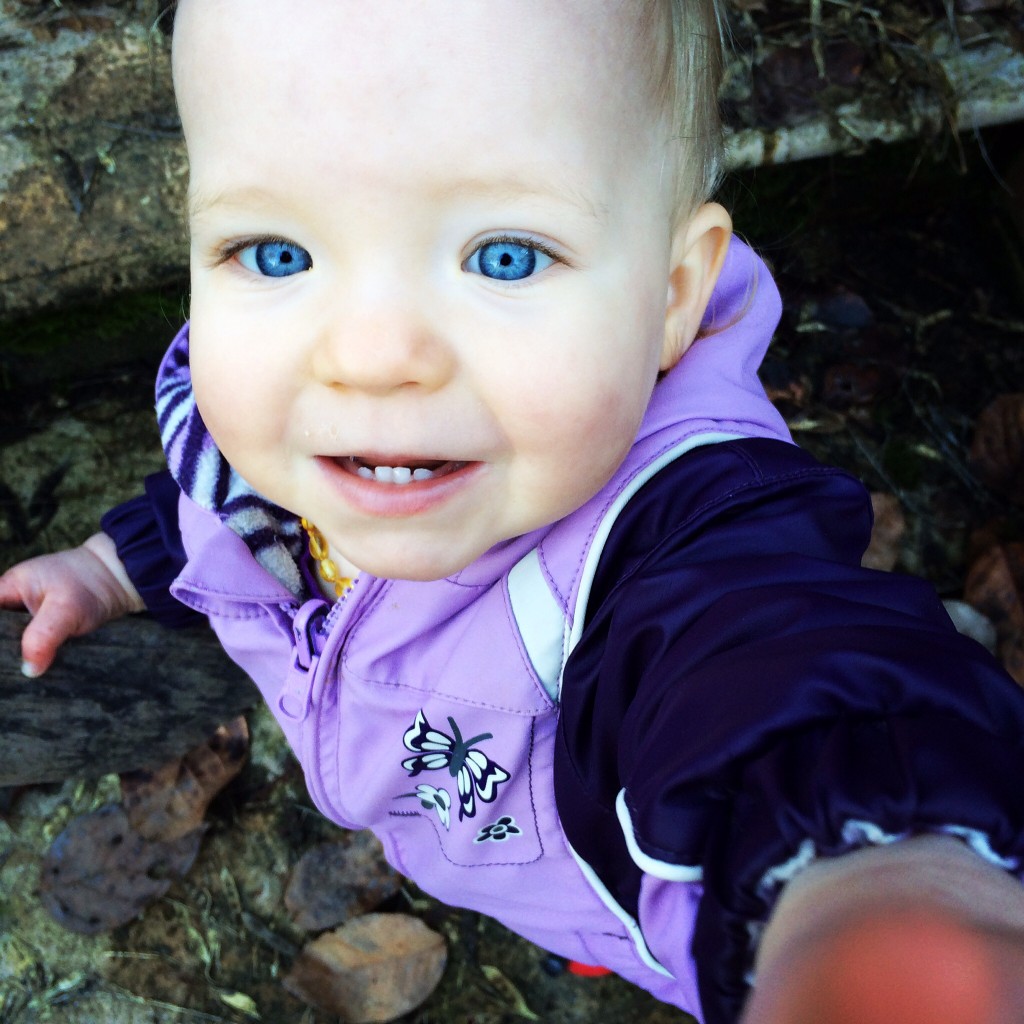 When I was pregnant with my little love, I had a million ideas in mind about the kind of parent I would be, and all these grand plans for what I would do (or not do) with my child. If you’re already a parent, I probably don’t have to tell you that the parenting reality that comes after a child is born often doesn’t match perfectly with your idyllic plan.

Using baby sign language was one of these plans I had, that I was sure I would be using every day with my growing infant, teaching her to communicate by using her hands. As soon as she was born I picked up a few books on baby signing and started reading (something that isn’t always the easiest thing to do anymore).

Soaking up the information in the books (yes, it is helpful for developing language and communication, and no, it doesn’t inhibit or slow down oral communication), I found that generally infants will not be developmentally ready to process signing until they are about 6 months old, and likely won’t have the dexterity in their hands to sign themselves until about a year old. Although it could only help and not hinder to sign the whole time anyhow, I decided to put the books and the idea aside for later, and spend my time focusing on more timely matters until then.

Well, 6 months came and went, as did her first birthday, with nary a sign in sight. So now that she was 1, was it too late to start signing? Had I missed my chance already?

I figured I had nothing to lose, so I would try to start using some signs and just see what happened.

Trying to get into a habit of doing something that is new and doesn’t feel natural, and may look a little silly if you’re not used to seeing it, isn’t exactly easy. I found myself feeling somewhat self-conscious using my hands in unusual ways while other adults were watching. This made me feel even sillier, since there was no reason to feel silly for trying something that could be so helpful for all of us, and I wasn’t exactly a stranger to signing. As a child, sign language was a huge part of our homeschooling, and we would attend groups and meetings where some of the members mainly spoke in sign language. We routinely practiced our growing vocabulary of hundreds of American Sign Language signs (of which I can only remember a few now).

But, I felt it was important, so I kept trying. I chose just a couple of words to begin with, and focused on signing them whenever I said the word to my little Z. In one book it was mentioned that signs for words that your little one is interested in will have the most success, which made sense to me since I know it’s very difficult for a child to learn anything that doesn’t interest them.

“More” was the first signing word that Z started using, and I was floored by how fast she caught on to the signing. It seemed like the first day I really seriously started using it with her that she grabbed up this tool for communicating and threw it back at me, as if she was thinking “Finally! I can talk to you big humans!”

As often seems the case when children start with signing, she started using the “more” sign for everything she was trying to communicate, since she realized it got a response and meant something. Now she uses it much more deliberately, to tell us she wants more food, more singing, more blocks, more of whatever it is she wants.

We’ve gradually been introducing other signs, and each time she picks them up so quickly that I feel I should be using a lot more signs much more frequently to let her flourish with her communication. But, while I know that picking up my game in the signing department could likely be very successful and ease our frustrations with understanding each other, I have to remember to be gentle on myself. I can’t do “it all” (whatever that’s supposed to mean anyhow), and re-learning this language is something I have to do as well, in order to use it with her. I can’t remember very many signs at all, unfortunately, and although you can make up your own signs (and Z does her own version of each sign), I believe it’s best to learn a language that many others will be able to understand, that she could use as she grows older. Why learn a language only 2 or 3 people can understand when you can learn a language used by millions all around the world?

Some of the signs we use successfully and consistently now are “more”, “all done”, “cheese”, “bath”, “toothbrush” and “Dad”. Z has also incorporated her own sign for questioning, too, making a shoulder shrug with her hand up by her shoulders and her head cocked, mostly used for “where?” For example, when Dad walks out the door, or when we’re talking about her Papa or someone who isn’t with us, she’ll make this sign as if to say “Where is he?”

I love that I now have a bit of an idea about what she’s thinking about during the day. It’s so heart-warming when she signs “Dad” and does her “where” sign at random times, and I can tell her he’s at work and can talk to her about him. Without these signs, I wouldn’t know she’s thinking about him, or about having a bath, or that she’d like some cheese, or that she wants to be all done tickling, or whatever her message is. 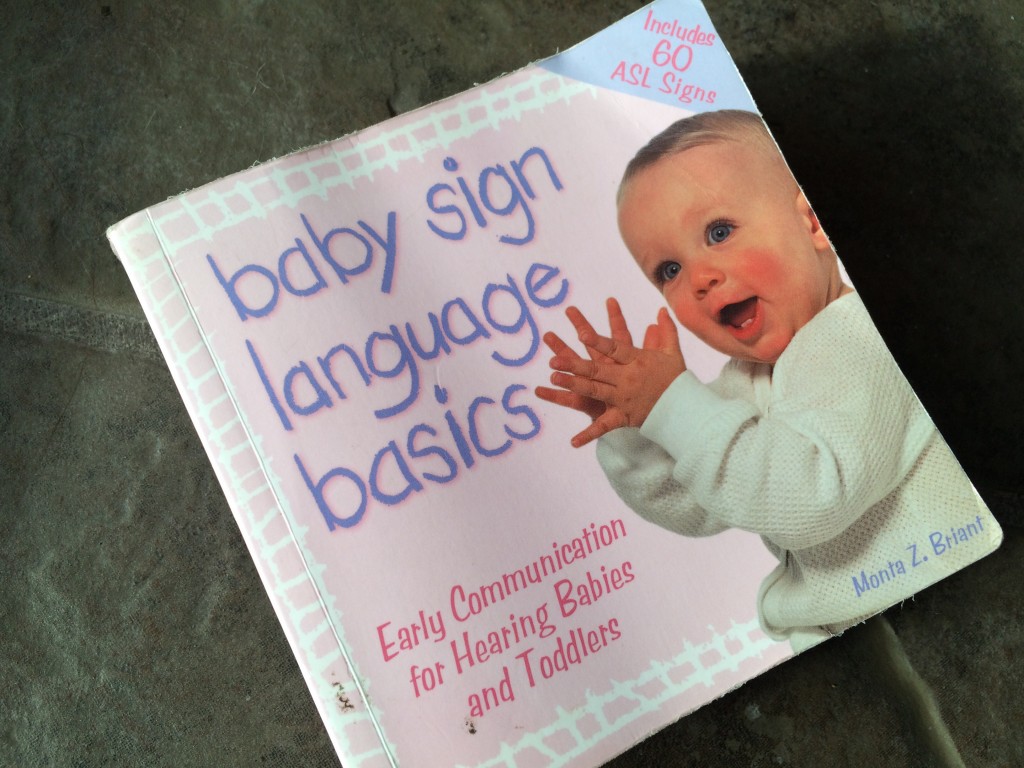 The book we’ve mainly been using is called Baby Sign Language Basics by Monta Z. Briant. I love that it’s so compact so I can take it around with me and it doesn’t take up a lot of space. It’s very simple, has lots of information about using signs with children and includes 60 American Sign Language signs for words that little ones may want to use. There is also a new version that comes with a DVD and is still very affordable. I’ve also found a lot of useful information and examples of signs online, like this website.

So my goal is to keep introducing and using signs. I can’t wait to understand more about what’s going on in that amazing little mind, and I look forward to the conversations we’re going to have one day.

But first, I need to go learn some more signs.

*Disclaimer* I plugged in an Amazon Associates link for the books I recommended. If you click through and buy one (or both, for some odd reason) of these, I will make a small commission on the sale. That doesn’t make these any less useful, though, and it doesn’t make my experience and opinion on the books or baby sign language any less true and honest. As always, I only promote what I stand behind. You can read my full disclosure policy here.

2 thoughts on “Using Baby Sign Language – Communicating with a Toddler”