My Awesome and Embarrassing Bellyfit Experience 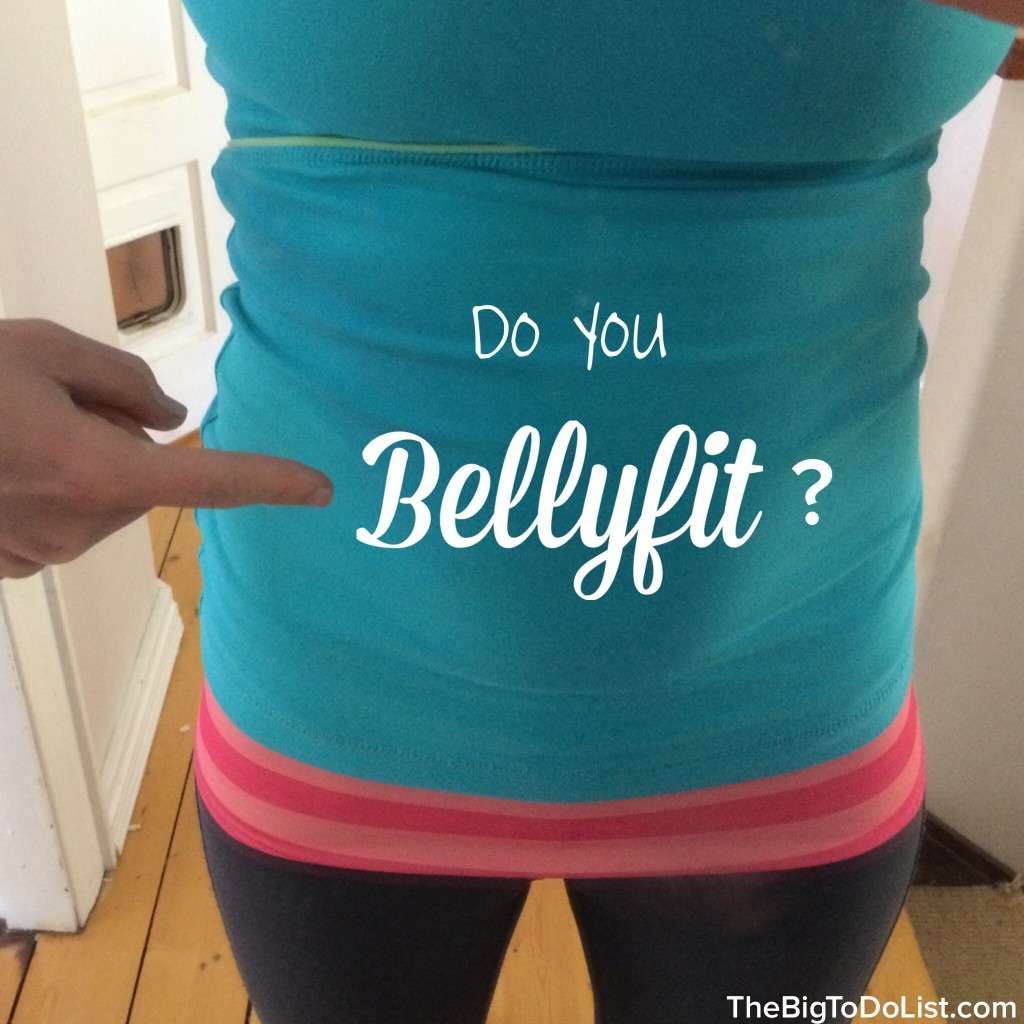 Have you heard of Bellyfit? It’s something I had no clue about before moving to Salt Spring Island. It seems like it’s caught on as a fitness routine in many different places now, but originated in Victoria, BC. Perhaps that’s why it’s so popular here on old Salty.

As I often do, I’ve been saying “Hey, I’ll go try that out sometime” for quite a while, but it hadn’t become more than a passing thought until last week. This is when a local Bellyfit instructor, Trina Aspinall, invited me to attend a class where all of the proceeds would be donated straight to family friends who are living in Nepal, with the intention of the money benefitting the community where so much devastation has been caused due to the two earthquakes that were recently experienced there. I know this came about a pure intention of providing aid and support for our greater worldwide family, but I would say that this seemed to be a great way to get some new people out to try the fitness class. I know I probably wouldn’t have made my way there, but the thought that I would get to take part in a class where the fee would go 100% to providing disaster relief, it was just the push I needed.

(As an aside, I also overheard that Trina’s 5-year-old son was actually the one to come up with the idea of a fundraiser class put on by his mom, which I think is just fantastic. I freaking love children. They amaze me daily with their empathy and ingenuity. Especially the children I’ve met on Salt Spring.)

I headed off to this first Bellyfit class with no idea what I was getting into. Okay, that’s not entirely accurate, as I had attended a few small mama-baby fitness classes taught by the same instructor when my little one was smaller, where some of the Bellyfit moves were incorporated. So, while it was quite a while ago, I did understand that there would be some dancy-aerobic-hip-bumping movements in my future. I was excited about this once I was reminded of it, as I’ve been longing to go do some serious tearing up of a dance floor these last couple weeks. It’s been far too long.

When I arrived, I signed the waivers and took a look around.

Dang. I obviously had not dressed quite appropriately (this always seems to be my case), and while everyone else was in more form-fitting exercise gear, I had come in what I had worn that day – the flowiest of pants resembling two large skirts that surrounded each leg (flash-dance, anyone?), and a knit-shirt over a see-though tank top. Luckily I had another lighter shirt to switch off with the knit one, and by some magical feat I had the forethought to bring socks and runners. 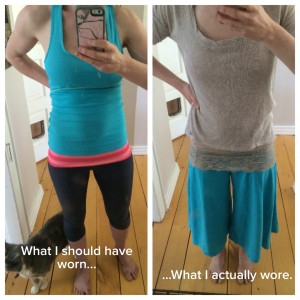 If I didn’t seem to fit in with these toned and confident fitness enthusiasts that I was sharing the space with before the class officially started, it became brutally apparent as we started moving.

The class was a fast-paced and energetic mix of tribal-esque dance, hip-thrusting, step aerobics, with some fancy arm movements, meditations, setting of intentions, and yoga. It was a pretty neat combination of body-, mind- and soul-awareness, and it was a blast. However, I came to realize very quickly that I have zero coordination. While everyone else in front of me seemed to be dancing in nearly perfect unison, fully understanding a following along with the sudden and quick new movements, I was stumbling along like some sort of whacky inflatable arm-flailing tribes woman who couldn’t decide if she should keep her clap-on lights on or off.

What are we doing? Forward-back-forward-step-step-clap-behind-clap… clap… step? There were countless times that I lost it and bumbled along in my own version of flail and clap. It was hard enough to simply follow the foot movements, but then there were arm motions to go along with them, and this is where I really lost it. Apparently my feet and arms cannot work harmoniously together. I couldn’t help but burst into laughter at my ridiculously uncoordinated self. I kept picturing Lisa Kudrow as Pheobe in Friends, flailing as she ran.

I tried to find a good video clip that would explain my ridiculousness, and the video below is about the best I could do. I have to admit, they look like they’re following along better than I felt I was.

This also made me wonder how sweet my sweet moves out on the club dance floors used to be, given that I may have been a little bit too intoxicated to be a fair judge of my skills during those long-gone days. Hmm. Thank goodness I know of no recordings that were taken. The few pictures speak volumes enough.

It wasn’t until we were all laying on the floor, with our legs sticking up in the air that I realized the full inconvenience of wearing the wrong attire. My billowy pants would fall limp over my legs, tumbling down around my thighs and exposing far more than I had intended on displaying. I can only hope that I didn’t flash anyone too terribly, and that everyone’s retinas are in tact despite the disturbing gleam of my pasty white legs. A quick alteration and I had the excess of my flapping pant legs knotted up to keep from falling. Not ideal, but definitely preferable to the surprise peep show I had awkwardly found myself putting on.

At the end of the class I was far less exhausted that I thought I would be, for an hour of intense movement that my body hasn’t had in… well, years now. Wow. I suppose I’ve built up quite a bit of strength and endurance carrying and chasing around my little one over the last 18 months. Unfortunately, I could also tell that my post-partum body is still far from being recovered in my abdominal region, with my diastasis (the big space running up-and-down between my abdominal “muscles” – or mushles – from being torn apart as my belly expanded far past it’s limits in pregnancy) calling attention to itself and feeling… weird… when I laid on my back and felt it. Very descriptive, I know, but it’s really hard to pinpoint all this funkiness my body is going through post-partum. I’m pretty sure many women share my surprise at just how much we change during pregnancy and birth.

I made a silly mistake and (of course) tried the level 3 version of a push-up we were doing, thinking push ups work your arms, not your abs. This is not true, and not a good idea for someone with my post-partum woes. Trina had given me explicit instruction to be gentle with my abs, as she knew of my issues, and gave lots of options for making each move appropriate for our different abilities, but I guess I’m not a great listener. Lesson learned: even if you feel amazing, a ripped up abdomen means stick to the level 1 alterations (or level 2, if you’re really confident it’s safe). At least I learned I now have the arm strength and stamina for some real push-ups!

Regardless of the abdominal un-fitness I need to work on in my own time, with the exercises my physiotherapist gave me, I felt amazing afterwards. Even the following day, besides being a little sore from working all those neglected body muscles, I feel phenomenal. It’s remarkable how much a little bit of exercise can change  your mood and your own body image. I know I couldn’t have got all fit and toned from a single 1-hour fitness class, but I do feel stronger and more in shape for having gone.

I enjoyed myself tremendously, even with the awkward embarrassment that is my body coordination, and I would definitely like to go back. Trina had a fantastic energy and kept a smile on her face while leading us through the moves, broadcasting encouragement and support that really did make a difference in how I felt about what I was doing. It felt great to finally be moving around and sweating it up in a group fitness class after so long. Whether Bellyfit, yoga, kickboxing, or your personal preference for fitness, it can make such an impact in your overall health and wellbeing to get out there.

If you are considering giving Bellyfit a try, I wholeheartedly encourage you to check it out. If you’re on Salt Spring Island, you can find Trina’s Bellyfit Salt Spring Facebook page here or you can email her directly at [email protected]. Give yourself a chance to get those hips a-bumping, those muscles a-moving, and (if you share my body non-awareness) have a good laugh at your own ridiculous flailing. Or you might find out you’re really good at catching on to the moves. Either way, the only thing that can stop you from having a good time is you. Let loose and get out there!