Kitchen Safety: What Not To Do When Your Stove Catches Fire 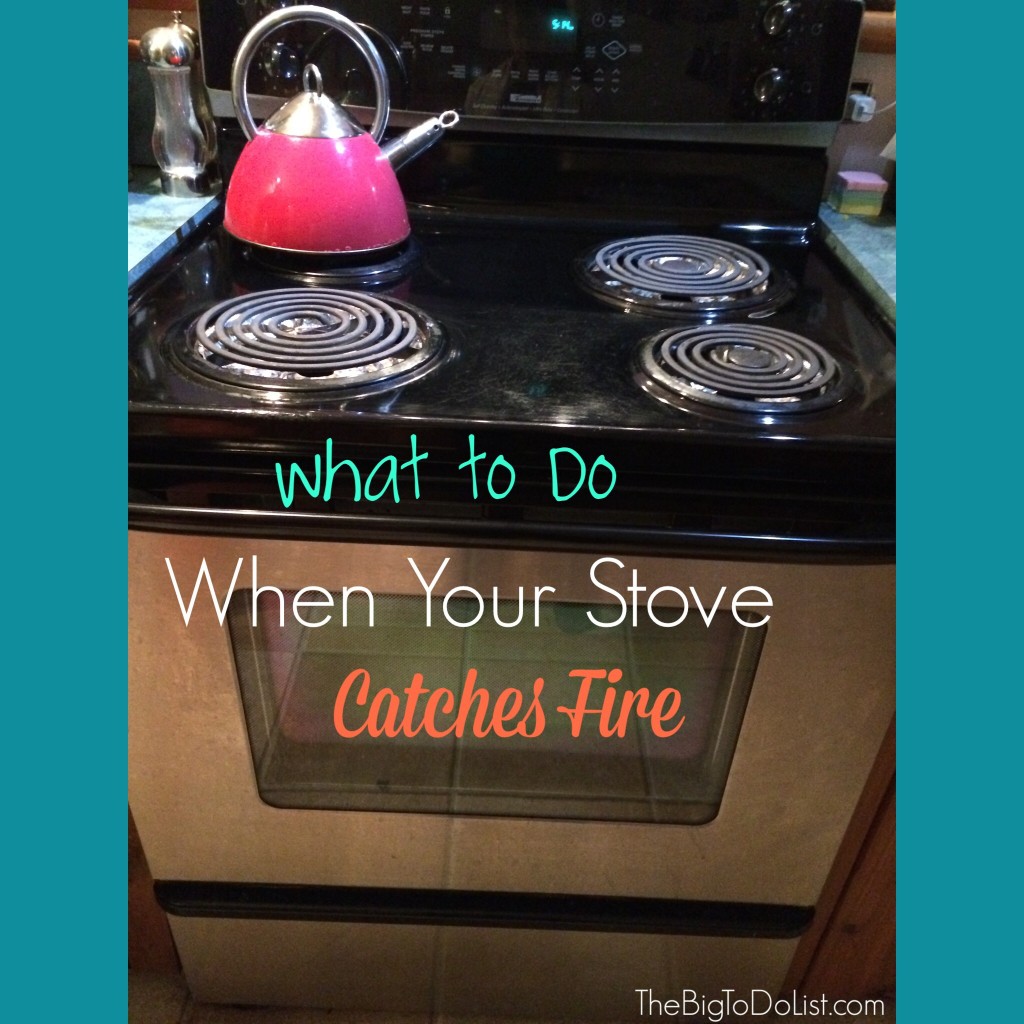 A little while ago I had a bit of a kitchen mishap. This time, it wasn’t to do as much with a culinary disaster like the previous post, but a slightly more serious affair.

As I was in a daydreaming trance in the kitchen, my hubby brought my attention to the smoke that was streaming up from the burner I was using to massacre some food. I flipped on the fan, as per his suggestion, and while investigating what was smoking (likely a stray piece of macaroni that had landed under the burner during my wild display that somewhat resembles meal preparation) *BAM*.

Fire erupted from underneath the element.

Ahhh!!! What does one do when a fire breaks out on your stove top? Take action to extinguish said flames? No, no. Clearly what is necessary is to scream and flap your arms while exclaiming “What do I do! What do I do!” (Note: this isn’t actually what you should do.)

I had the thought of dousing the fire with a pile of flour while I flailed, but luckily, Hubs ran to the rescue and poured a good splash of water from a pot onto the flames, putting out the fire and creating an exquisite soup a la stovetop.

Although this may have worked for the time being, we worried about the flood that had now claimed our stove top and if it would be a hazard with the electrical stove, and wondered what we really should have done to return our surprise fire-cooking burner back to the electrical element we are used to.

So, what does one do when you want to know anything nowadays? You ask Google.

This is what our scholarly search turned up about dealing with a kitchen fire. You can find this information here, directly from eHow.

When flames surprise your culinary adventures, what you should do is the following:

Either cover the fire with a metal pot lid (if the fire is in a pan, this should work well, but I’m a burner where there is other access to air it might not work), pour baking soda on the flames (you will need a lot, so if not readily accessible you’re probably better off not wasting your time finding it), or use a fire extinguisher to put out the flames. If you have an extinguisher and use that, remember it will contaminate your food and kitchen and should be properly cleaned up.

What you should not do is:

DO NOT pour flour on a fire. Flour is a great explosive, apparently, and is a great way to turn bad to worse with a *BOOM*.

DO NOT pour water on a (grease) fire. If the fire is burning on grease, the water will cause it to splash, spreading the grease and the fire.

The majority of kitchen fire calamities happen because the stove was left unattended. Stay focussed and stay by the stove, friends. And keeping a canister of baking soda next to the stove might not be a bad idea, either.

One thought on “Kitchen Safety: What Not To Do When Your Stove Catches Fire”

Learning to play pool with Dad. ♥️
Look what I’ve been making! @gspray81 gifted me some more woodworking tools to pursue my interest in making my own wood toys to accompany our modeling dough and the other amazing wood creations by other local makers. Loving how the dremmel has been working for me to carve in shapes for negative-space stamps. They look soooo good pressed into the dough. 🙌🏻
It’s hard not to compare yourself to yourself.
Then and now (well... more like 6 months ago), @billiewoodsphotography style. Thank you for being the one to capture all my biggest life snaps! ♥️♥️♥️