I only know of one Salt Spring Island pumpkin patch, but I admit I haven’t looked far. The one up at Bon Acres farm is where we always head (and the only place I’ve heard of anyone going), and the experience is perfect for us. 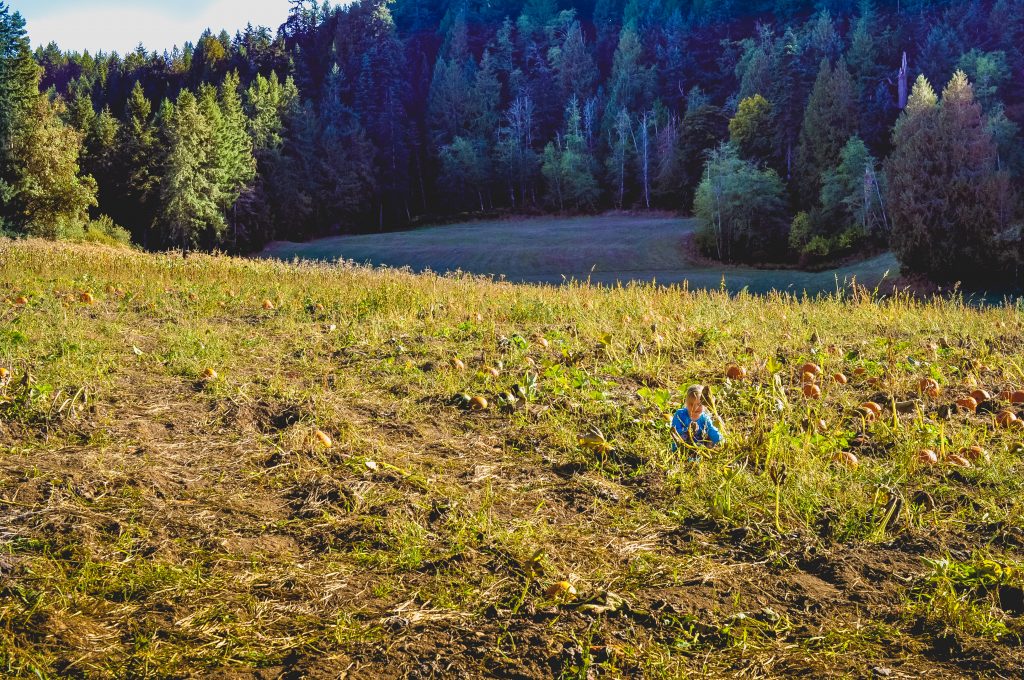 Last year I kind of dropped the ball. By the time we went up to the pumpkin patch (a mere few days before Halloween) there was little left aside from some very rotten pumpkins, with only a few firm orange orbs amidst a sea of seeds and goo. It was interesting, but not exactly the kind of experience I had in mind. (“Behold, child, the pumpkin patch!” “…Where?)

So this year I was determined to make it to up to Bond’s before all the October magic had rid the patch of it’s pumpkins.

On the 4th of October we headed up to the farm and drove straight to the patch. As I pulled into the little space before the gate to the vast expanse of field, I realized perhaps we were a little bit early. The gate was closed and barricaded up with deer proofing, and I realized that the “U-PICK” signs I remembered from the last few years were nowhere to be seen. Perhaps four weeks before Halloween was a tad early to be picking pumpkins. 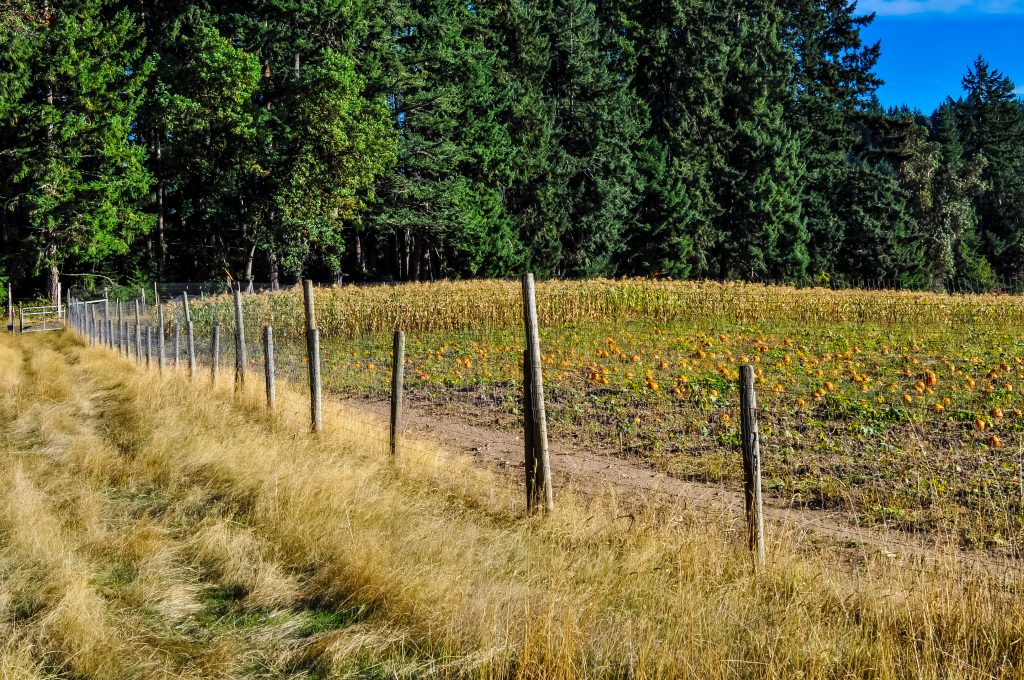 I decided instead of opening the gate without permission, or driving back home with a sorely disappointed preschooler, we would just take a walk to the vet office behind the farm stand, and see if we could find anyone to talk to about the pumpkins.

On the way down the narrow dirt road, just past the greenhouse and garden, we spied a jay bird. He was clearly working at something, and we eagerly watched him hop into the bush as we passed. Little Miss Ziggity caught sight of something on the roadway and picked it up. We realized that we were standing under a walnut tree. She carried the encased walnut the rest of the way to the office, turning it over in her hands with excited curiosity.

As we approached the vet’s office, I was happy to see Malcolm Bond, the owner, farmer, veterinarian (and I’m sure much more) of Bon Acres. I knew he would have an answer for us, and always made me feel welcome with his friendly words and calm demeanor when I have bumped into him on the farm before.

Just as I was getting to the door where he was, another woman struck up a conversation with him. It was close quarters, and I didn’t want to miss the chance to ask Mr Bond about the pumpkin patch we were so desperate to get to (it’s not like we live close and have weeks to spare or anything…), so we stood awkwardly for some time right next to the couple conversing, smiling and nodding/gently “hehe”ing along with their conversation when “appropriate”, fulfilling my awkwardness abounding role in life. 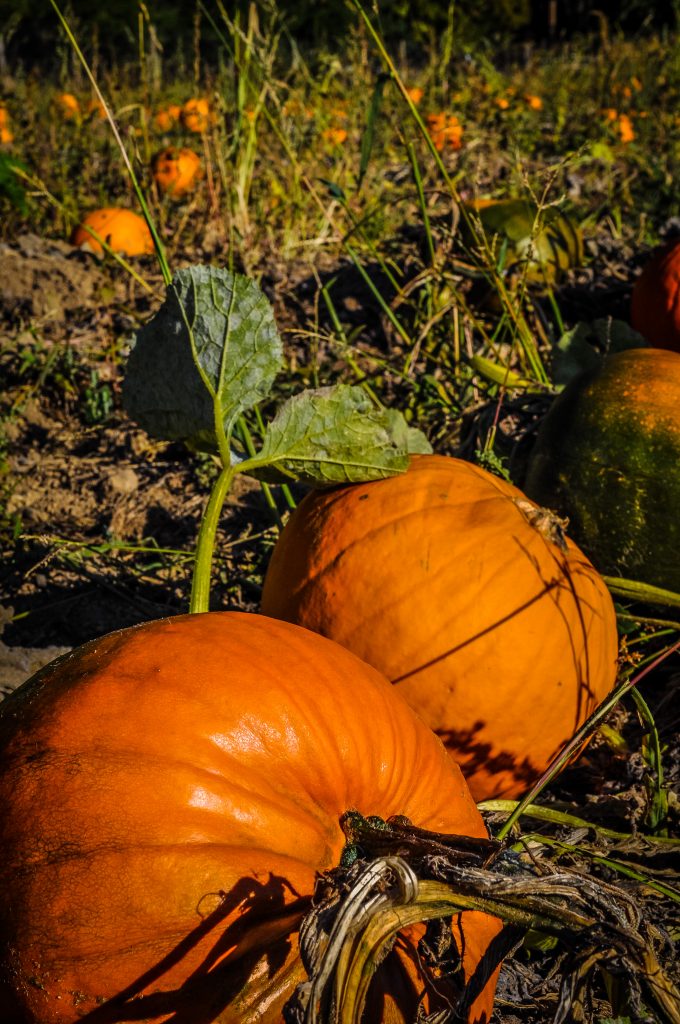 As their conversation came to an end, the farmer was immediately called in to a phone call regarding one of the animals. We followed him in and waited as casually as possible, taking in the vet’s office until one of the staff there was able to ask what we needed. We explained and she said to wait for the main man to be done on his phone call, so he could let us know about the pumpkin patch.

While we waited, I was struck by a very large portrait that had been painted of Mr. Bond. It was truly captivating, and I pointed it out to Little Z as the same man who was behind the counter. Listening to this man communicate test results amazed me. He clearly was a man of skill in many different areas, with an intelligence and energy I can only hope to have half of at his age. Heck, at my age. I feel like I’m falling apart and my brain is failing already.

Anyhow, the phone conversation came to an end and attention was turned to us. We were instructed that, yes, they had not actually opened up the patch yet, but we were welcome to head on in. As the gate was heavily laden with deer-proofing, the accommodating farmer was going to go get his farm vehicle and meet us down there. We started walking, but as we started on the little dirt road past the farm stand, the Gater (tractor to Z) approached and much to Z’s (and my) delight we were offered a ride.

When we were in the “tractor”, Mr Bond noticed the walnut and explained to us that those clever stellar jays will drop the walnuts onto the road, hoping a car drives over them and cracks them open. I thought that was a neat little piece of information! 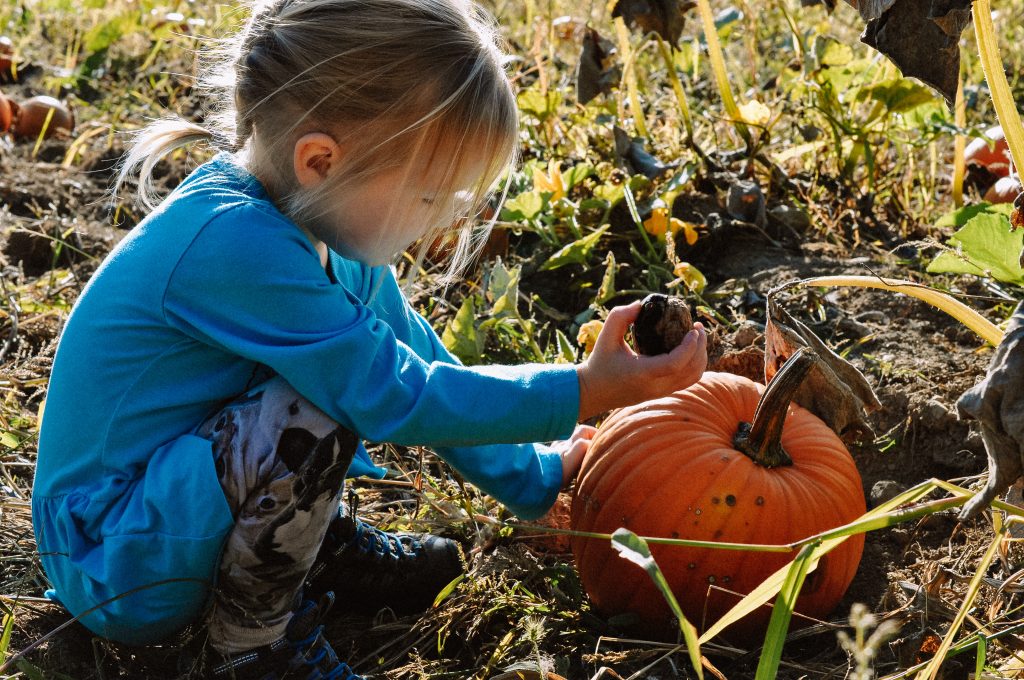 So we finally got into the pumpkin patch, which still wasn’t as impressive as it would have been had I waited just a little longer for the tall grass along the rows to be mowed down, but hey. There’s still time to get up there for another peek at those pumpkins if we really want. Z chose three pumpkins: two small pumpkins for her and a friend to decorate, and a very large pumpkin that I hope will make it to carving time without going rotten. Crossing fingers! 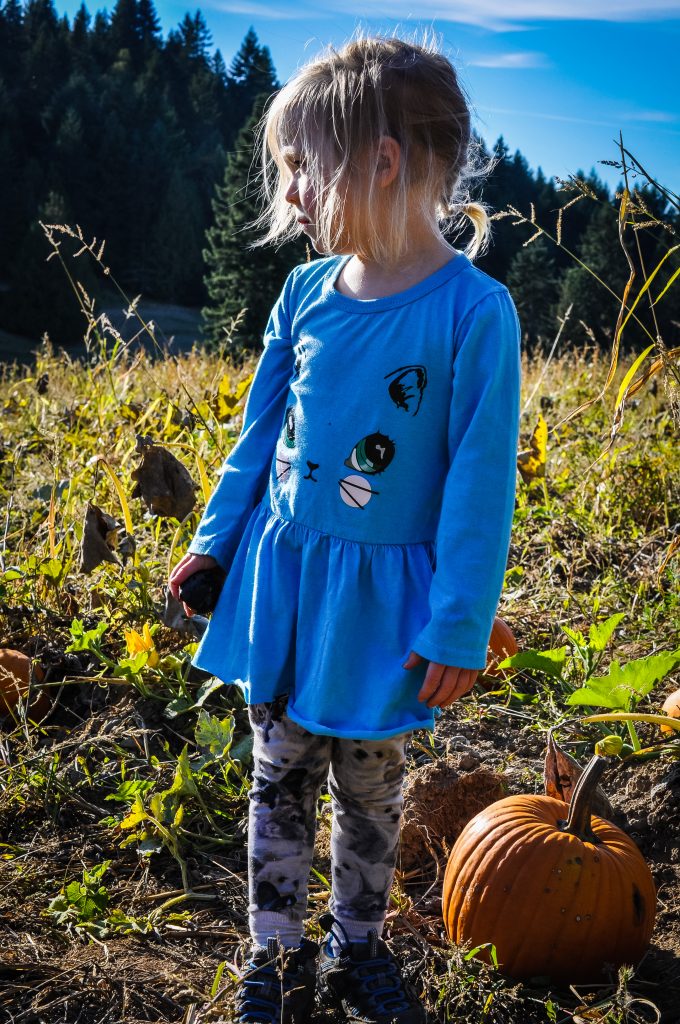 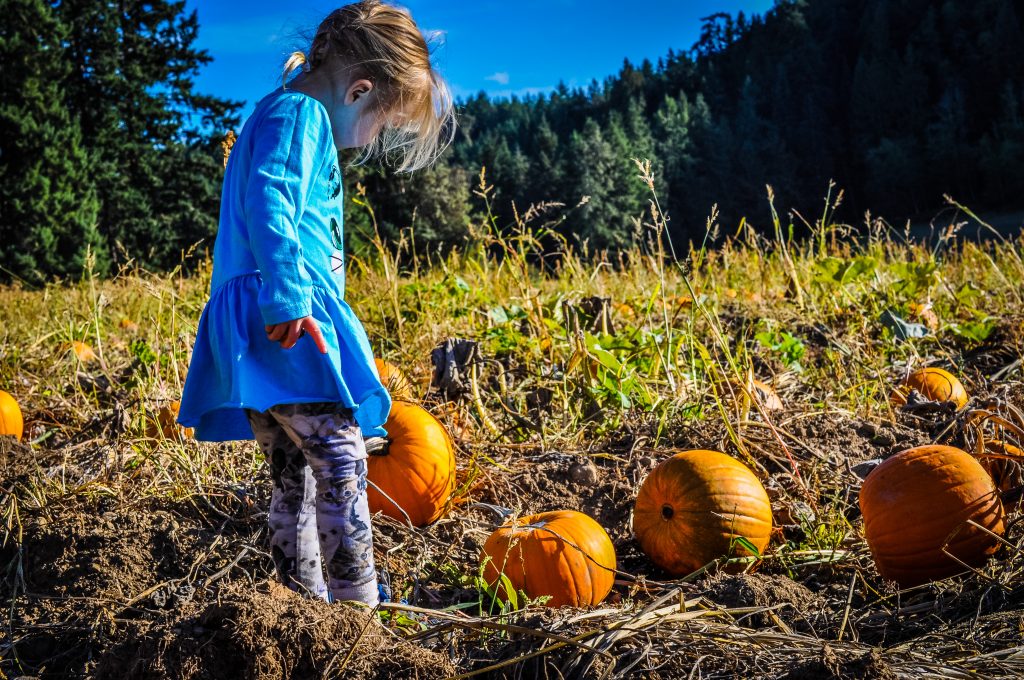 Will you be heading up to this or another pumpkin patch this year? Where do you like to go?

Thanks for reading about our Salt Spring Island pumpkin patch adventure! Sign up here to receive a short and sweet email that lets you know if there’s anything new posted on The Big To-Do List.

Looking for more fall fun? Read this post on Autumn Activities for Toddlers and Early Learners.

Want some ideas to use with those pumpkins? Read this post on Creative Ideas for Pumpkin Decorating with Young Children.

September 2017 Through My Lens
Exciting News from Hannah Spray Photography!

Skating! This determined kiddo even did some jumps, and tried some quick turn-arounds on the ice. #littlemissziggity
We spent some time yesterday afternoon chasing tennis balls down the rushing streams in Mouat’s Park.
8 things I love about this girl on her 8th birthday (a few days late):
This is 8!!!
Taking and editing photos, making modeling dough, and home learning Grade 3 is my life right now on constant repeat. I am so into it.
I’ve been so fortunate to have fantastic weather peek out for my sessions this fall. Wowza. What a beautiful morning to spend watching little humans and their devoted parents play on the beach. 🙌🏻