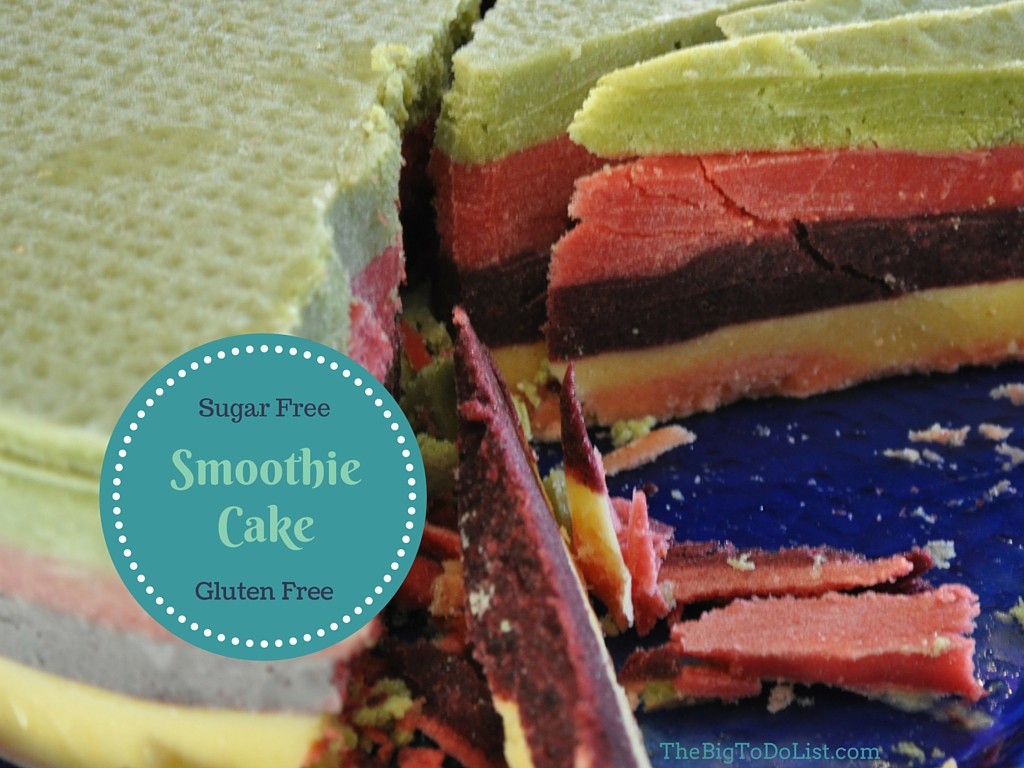 Have you ever heard of a smoothie cake before? Basically it’s very much like an ice cream cake, but made with smoothie instead of ice cream. Yes, a hard concept to wrap your head around, I know. Why change up something as perfect as ice cream cake?

Let me tell you why. Ice cream, while delicious, is full of sugar. Sugar presents a variety of problems when included in human diets, especially when the human is your child and you are happier when they are calm and able to control their bodies and voices (or, as able as they ever are, anyhow). We learned the hard way during our family travels in Colombia that sugar has some pretty phenomenal effects on tiny little bodies and systems that aren’t used to the energy overload. “Sure, we’re on vacation” got used a few too many times, and while a lollipop offered to your child might quell the storm in the moment, it’s a sure fire way to make moods, listening and cooperation skills, and energy levels go all haywire.

Before the trip that ruined my toddlers blissful ignorance of sweets and sugar, we were very careful to keep sugar – especially refined sugar – out of her diet. When other parents were dealing with meltdowns and frustrations after doling out chocolates and cotton candy, we held strong to our commitment to keep our little one sugar-free. Oh, how I miss those days. Once you taste that sweet, sweet deliciousness, you can never go back. We try to keep the sweets to a minimum, but have you ever tried telling a toddler who has tasted the sweet nectar, that they can’t have a cookie when you yourself are inhaling one? Not an easy task, my friends. You may find yourself ducking behind counters and in closets shoving oreos in your slobbery little trap to keep your little one from catching you.

But, let’s get back to the smoothie cake recipe.

For my daughter’s first birthday I tried my hand at sugar-free, gluten-free, vegan cupcakes (if you know someone who is a celiac, or you live on health-conscious Salt Spring Island, gluten-free and vegan is a must for gatherings). While the whipped topping was deliciously sweetened with flavoured stevia, the cupcakes were absolutely awful. I can only blame myself because, as usual, I “tweaked” the recipe to suit my needs without properly substituting. Oops.

When Z’s second birthday rolled around, I had a new plan for a cake that everyone could eat. Having seen and tasted the most beautiful smoothie cake at another baby’s birthday party, I knew I had to try it for our own celebration.

I’m not going to complicate things for you. The basic method to making a smoothie cake is to make a smoothie, pour it into a cake pan, and freeze it. Voila! Smoothie cake!

Because I wanted to replicate the beautiful coloured layers of the first smoothie cake we experienced, we made the cake over a period of a few days, to give each layer time to freeze. This worked well, since each day I could offer my toddler a bit of healthy smoothie as a snack. We made four different layers: green, yellow, purple and red.

Since the cake was supposed to look like a field on top, as a base for the little farm animals for Z’s farm-themed birthday party (I know it sounds like it might have been a well-put-together party – trust me, I’m not that mom, I just slapped a couple semi-farmy things together in a room), we made the green layer first. You see, it would be the flattest part, so when taken out of the pan and flipped over, the green would be on top. 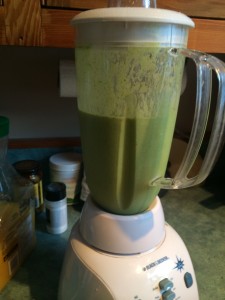 To make the green smoothie we used: 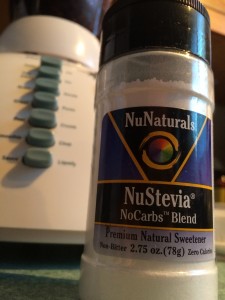 To make the red layer: 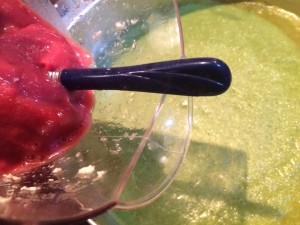 To make the yellow layer: 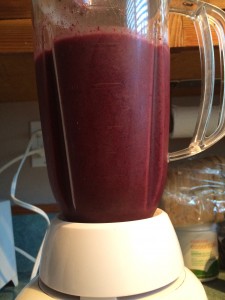 To make the purple layer (a naturally coloured blue smoothie is not an option, I quickly realized, seeing as blueberries are not truly blue):

The cake turned out to look pretty cool, if I do say so myself, and tasted delicious (once we got it cut and it had a chance to thaw a bit). There were a bunch of comments on how unique and cool it was. After everyone had eaten their slice, we cut the remaining cake into pieces and wrapped them in plastic wrap to keep in the freezer. This made for a few easy-smoothie days later on, where I could grab a piece of frozen smoothie cake for myself and my toddler to share in a bowl. If we let the cake thaw for long enough, it turned into a liquid smoothie bowl (like a smoothie soup) which we could eat on it’s own, or with “sprinkles” (omega seeds), cereal, and whatever else sounded good. 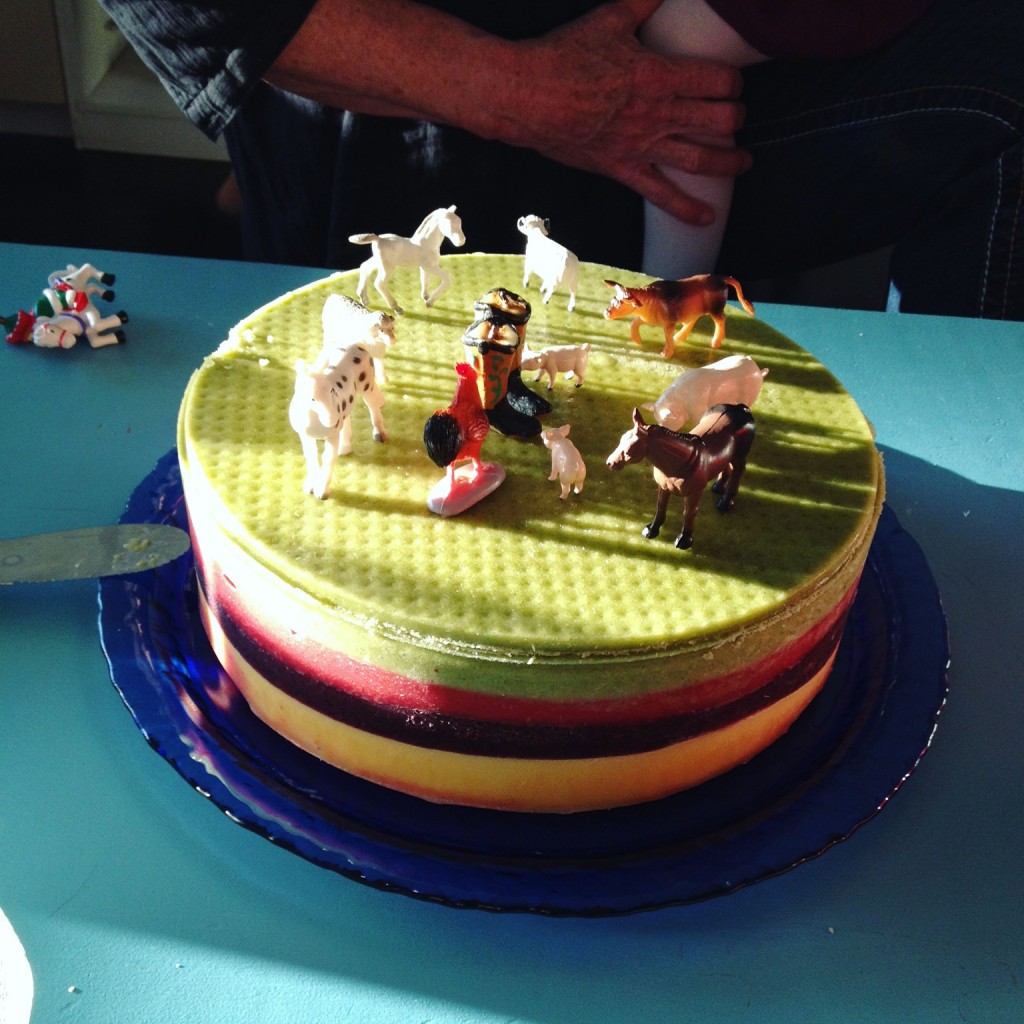 Here are some tips for making a smoothie cake: 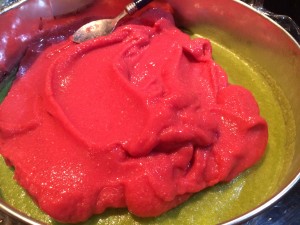 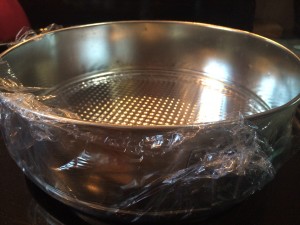 Have you tried a smoothie cake before? I’m interested to hear your experience, any tips, and see how yours turned out. Use the comment section below to tell me all about it, or connect with me on Facebook, Twitter, or Instagram. I’ve also recently hopped over to Periscope, too, so you could always share your experience with me that way, too!

Want to try natural stevia liquid sweetener for yourself? I’ve been using NuNaturals and NuStevia stevia products for over a year now, and have nothing but good to say about them (you can read more about the products and what I use them for here, here and here). The awesome people at NuStevia have given me the go-ahead to offer up another set of their fabulous giveaway packages to you lucky readers! Enter using the Rafflecopter form below for your chance to win 1 of 4 NuStevia prize packs. Each prize pack includes one bottle of the Vanilla NuStevia Liquid, a bottle of sugar-free cocoa syrup (great for chocolate milk!), & a bottle of sugar-free mint cocoa syrup, plus a 50 packet box of NuStevia No Carb Stevia packets. In addition, each of the 4 winners will also receive a free bonus prize. The total retail value of each package is $70.00.

In addition, you can use the discount code BLG0616 (which remains in effect until JUNE 30, 2016) to order anything from the NuNaturals website: www.nunaturals.com. The code will get you 15% off your entire order, but you can’t combine it with other discounts.

Giveaway open world-wide. Prizes can not be shipped to P.O. boxes.

*Disclosure* The sweet people at NuNaturals (see what I did there?) have generously donated the giveaway packages to the 4 lucky winners, seeing as I used some of their tasty stevia products in this delicious creation. Therefore, the giveaway is sponsored, but the post is not. (Although, I should probably let you know that NuNaturals has sent me a bunch of free products over the last year, so that’s pretty cool.) You can read my full disclosure statement here.

Nutrition Q&A: Do Toddlers Need Multivitamins?
The Day I Almost Died & Getting Back On Some Wagons: Friday Five